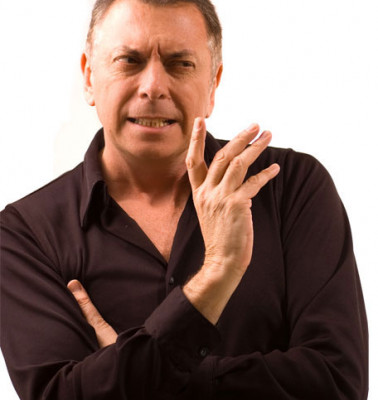 Kevin Oakes came to Germany from South Africa at the age of 18 to study.
He graduated from the Hochschule für Musik und Darstellender Kunst in Frankfurt am Main, as an actor. His talent was recognised very early on, and so he came to work with directors like Hans Neuenfels, Peter Palitsch and Istvan Bödy in the Frankfurt Schauspiel (State Theatre), and with Hans Werner Henze and Christof v. Dohnanji in the Frankfurt Opera. In the T.A.T. he had the good fortune to work with Rainer Werner Fassbinder.
Kevin studied Jazz and Modern Dance in London under Robin Kovacs.

In 1979 he founded the Café Theatre in Frankfurt, which to this day is known as » The English Theatre, and is very well known and respected.
As an actor (Hamlet, Jason, Orestes, Estragon, Oscar Wilde, etc.) and as a director (Shakespeare, Becket, T. Williams, Annouilh etc.), Kevin celebrated triumphs with both press and audiences. He also played major roles in the Heidelberg State Theatre (Faust 2) and the Bad Hersfeld Summer Festival (The Birds).

Fragile Theatre was founded by Kevin in London in 1980, where he developed his Healing Theatre Method. Here he wrote 4 plays in this method, which were so successful that they were translated into up to 3 languages.

One play Raw Knees was translated into Hebrew in 1986 when Kevin conducted an actor’s workshop for Israelis and Palestinians in Tel-Aviv. There he was introduced to the Palestinian Theatre Company "EI Hakwati", who invited him to do a world tour with them. Unfortunately his commitment to Fragile Theatre in Europe did not enable him to do the tour.

Kevin Oakes, who had also worked as a model, was asked to choreograph and produce fashion shows. The offers increased, and after so many years of being the “struggling artist" he was attracted to the international life of the fashion world.
Kevin Oakes still directs theatre and musicals e.g. "Gigi" in the Baden Baden Opera, and various Business Theatre projects, but his main field is the production of shows.

Today he is one of Europe's most renowned fashion choreographers and producers, as his reference list will tell you. Now he is off to new horizons, as a singer and performer again!